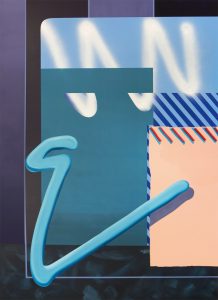 Anna Nero’s artistic work deals with the questions of sexual and religious fetishism, Do-It-Yourself-Culture and the animism or “life“ of things. She explores possibilities of representation and the value of the painting as a cult object, icon and artifact. General illusion of space or object, whether by coincidence, high craftsmanship or easy DIY-technique interests her, so she mixes different ways of applying paint to the canvas and works with different structures and layers. She is drawn to things around her – their appearance, consistency, material, function and sometimes even their ‘character’ or ‘agency’.

Her paintings frequently start with an input given by the everyday environment, which can be banal, formal, trendy, vulgar or even silly. In the process, she constantly crosses paths between strict and sleek geometrical forms and bold, playful brush strokes. Those two are the poles between which her paintings oscillate – constructed and intuitive, strict and playful. Most paintings start with systematic grids and patterns, which are overpainted by gestures and forms in the following process. The grid places the object or gestures on the canvas, and it is an operating, organizing system as well as an element in the painting itself.

The artist Anna Nero lives and works in Frankfurt am Main and Leipzig. She studied painting at Art Academy Mainz, and Art Academy Leipzig, where she earned her MFA in 2015.