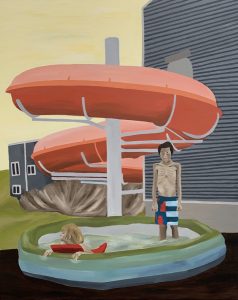 Collage is at the center of Juliet Casella’s work, thanks to which she develops a singular language acknowledging the ever-growing saturation of the flow of images that surrounds us, which she uses as raw material. Obsessed with the world of childhood and its disillusions, she systematically juxtaposes elements in her collages that are both reassuring and threatening. Water, plants and minerals are also omnipresent, as a reminder of our physical belonging to this world, but also as an illustration of the unpredictable forces of nature and the limits of our power. Recently, she has started to bring her collages to life with other means of expression, notably painting.

Juliet Casella graduated from the Paris-Cergy National School of Arts in 2017. Her work has been exhibited in Paris, Buenos Aires, Tokyo and Denmark. She has also collaborated with great fashion designers, like Nicolas Ghesquières for Louis Vuitton, as well as with musicians like Feu! Chatterton, Miossec or Metronomy, for whom she made video clips.