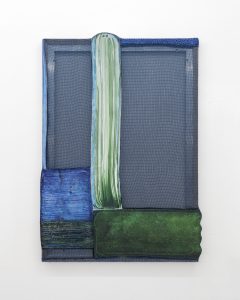 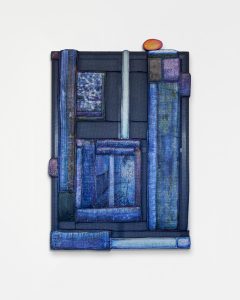 In a time in which it has become impossible to draw a line between the analogue and the digital, Danish artist Kristian Touborg (b.1987) has epitomized a new kind of subjectivity in painting, pairing intimacy and playfulness with art historic references and new technologies. In Touborg’s works a personal library of varied imaginary has been used as vital elements in an investigation of the multiple and branching paths that contemporary painting and sculpture can embody in an increasingly digitally image-saturated world.
Expanding on meditations on modern image ecology Touborg has constructed a range of two- and three- dimensional works by applying a mixture of painterly gestures led by spontaneous brushstrokes of vivid oil paint as well as demonstrating a profound interest in new media and technology.
The enchanting imaginary presents motifs rooted in all the consequences we face because of the omnipresent, yet unnoticeable, technology that penetrates and defines our present-day social interaction and communication.
In Touborg’s alluring imaginative compositions, a careful mixture of figurative and more abstract extracts sets the scene for interlinked, yet wholly autonomous works, in which a lively dialogue is established between repetition and variations in colours and form.
Demonstrating an innovative approach to figuration and a distinctive choice in subject matter, Touborg’s works feature an assorted cast of characters, seemingly pulled directly from his mobile phone camera. The results in a painterly vocabulary constituted by a free expressionistic voice, as Touborg paints and collages vivid luminous and vibrant wall pieces using private motifs drawn from everyday life.

Touborg’s works can be described as at once visual, tactile, historical, mental and emotional, as well as his work triggers emotional and intuitive responses. Although his paintings might appear to depict something ‘real’ – a familiar bedroom scene of two persons equally lit up by the piercing blue light from a mac as well as the evocative moon light, for example – there is, in fact, no ‘original’. Reproductions in various materials have been sewn together with canvases, and leaves the viewer with myriads of impressions.Touborg lives and works in Copenhagen, Denmark. He holds a Master of Art from Royal Danish Academy of Fine Arts, School of Design, Copenhagen.