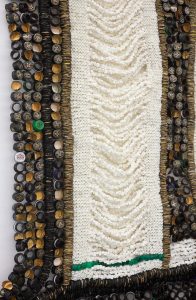 – “Takadiwa’s mission is to change the world through his unique art”, By Barnabas Ticha Muvhut. BUSINESS DAY, 4 October 2018.

– “Takadiwa’s mission is to change the world through his unique art”, By Barnabas Ticha Muvhut. BUSINESS DAY, 4 October 2018.

Moffat Takadiwa’s (Zimbabwe) work is distinctive in the composition and usage of materials, with  the extensive use of bottle tops, toothbrush bristles and keyboard keys arranged in abstract and  literal shapes amalgamating in mesmerising wall based-works.

His body of work is an exploration and documentation of cultural identity and the environment,  specifically highlighting the large scale generation of plastic waste and consequentially the  environmental impact of landfills.

His works lend heavily from traditional Zimbabwean textiles, while proposing an impactful  contradiction- an almost regal creation that is as impactful as it is beautiful.

Moffat Takadiwa is represented by Nicodim Gallery and is part of a collaboration between both galleries.